Santiago is the capital of Chile, with approximately six million inhabitants. People come from around the world to visit Chile's famous wineries, some of which are situated only 45 minutes from the city center.

In addition to its wine, Santiago is also famous for its smog, which rivals (and probably exceeds) that of L.A. During the four days I spent in Santiago, I never saw more than a faint outline of the nearby Andes that look so majestic in the postcards sold on every street corner.

Despite the haze, Santiago is an enjoyable city with beautiful historic buildings, a lively arts and music scene, shopping galore and plenty of parks. And for wine lovers, Santiago is the launching pad for tours of Chile's many vineyards.

Unfortunately, as is the case in most large cities, both tourists and visitors alike must be wary of pickpockets. I saw a man snatch a camera from around the neck of one of my travel companions in a heavily patrolled area, and several other people witnessed similar crimes.

Santiago was my last stop in Chile, and the pickpocketing incident aside, my final impression of the country is very positive. Chile is a beautiful country with an amazingly diverse landscape - from the jagged Andean peaks and glaciers of Patagonia, to the smoking volcanos of the Lake District, to the arid desert of the north. Less than 230 miles wide, but more than 2700 miles long, Chile has a massive swath of coastline that I'm eager to explore further. Most notably, the Chilean people are friendly and hospitable, and they frequently went out of their way to help me or my friends.

Of the five countries I visited in South America, Chile as a whole seemed the most developed - from its transportation system, to its postal service, to the variety of goods and food available for sale. It was the place where I saw the most women in uniform, perhaps not surprising with South America's first popularly elected female president leading the country.

I will miss the Chilean street food: empanadas (savory pastries, baked or fried, and filled with meat, egg, cheese, onions and olives); pastels de choclo (think shepherd's pie, but topped with mashed corn instead of mashed potato); chicken or steak sandwiches piled high with guacamole, lettuce and tomato; mote con huesillos (peach nectar with husked wheat, served as a cold drink - the Chilean equivalent of bubble tea), and, of course, the many cakes, tarts and churros. 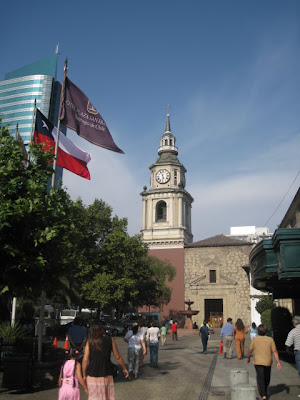 Iglesia de San Francisco, one of Santiago's oldest buildings. The church, which was originally constructed during the late 16th and early 17th centuries, has Franciscan, Arab and Spanish influences. On the various altars within the church, people affix placards with prayers, praises and photos of loved ones. 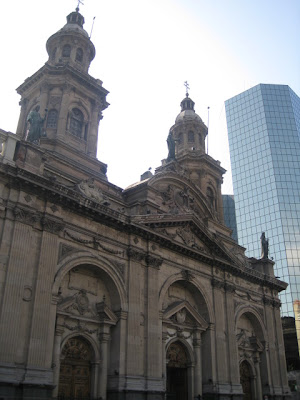 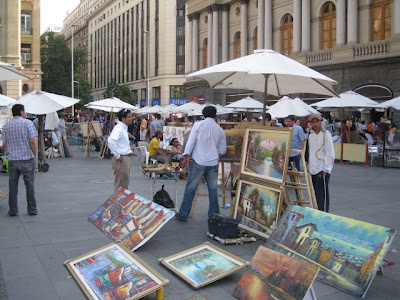 Artists display their wares in front of the Catedral Metropolitana at the Plaza de Armas. When Pedro de Valdivia founded Santiago in 1541, he laid out the city in a grid, with the Plaza de Armas at the center. The Plaza de Armas also holds the Correo Central (Central Post Office), built in 1882 and home to an interesting postal museum, as well as the Museo Historico Nacional. 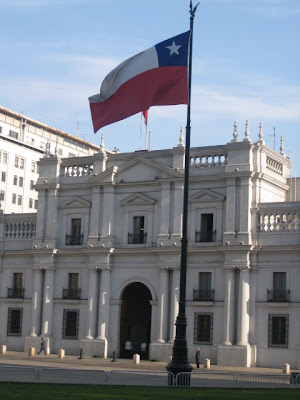 The Palacio de la Moneda was originally built as a mint but now serves as the country's presidential palace. The police hold a changing of the guard ceremony in the mornings. 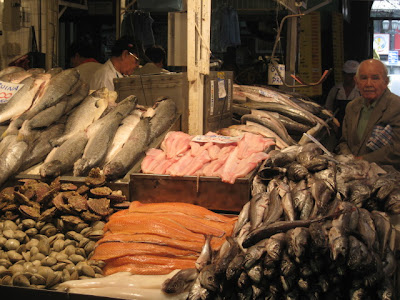 Fish for sale in the Mercado Central. In addition to fish, the Central Market has meat, fruit, vegetable, cheese and spice stands, and plenty of restaurants.
Posted by Frances at 9:01 AM