The coastline north of Swakopmund is known as the Skeleton Coast, because of the many shipwrecks that have occured there. If sailors were able to successfully navigate the foggy, shallow and rocky coastline to shore, they were met with Namibia's vast and inhospitable desert, which often meant death.

Along the drive north, we stopped to see the Cape Cross Seal Colony, which is the VERY smelly home to 80,000 to 100,000 cape fur seals. There were lots of seal pups nursing or playing in the water, and several jackals waited in the wings to snatch up a weak or injured pup for dinner.

Northeast of Cape Cross, in the plains of southern Damaraland, is Spitzkoppe - a 1728m peak known as the "Matterhorn of Africa." Spitzkoppe and the surrounding peaks are granite inselbergs (isolated mountains) that seem to rise out of nowhere, and the landscape looks surprisingly similar to the Pinnacles in central California. Because of recent rains, there were flowers in bloom and green grass on the ground amongst the unusual rock formations.

In addition to the interesting scenery, the area also has some ancient rock paintings. As I walked around the area, I could hear thunder rumbling in the distance, and not long afterwards, a slice of rainbow emerged from the dark grey thunderclouds. 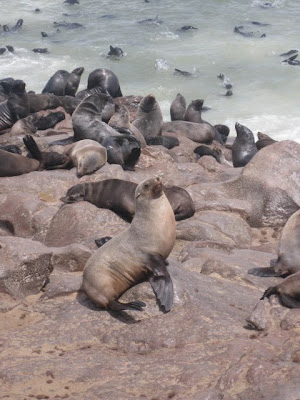 A cape fur seal basks in the warm Namibian sun. This photo does not give a good perspective of just how many seals there were at the colony...they were literally everywhere! 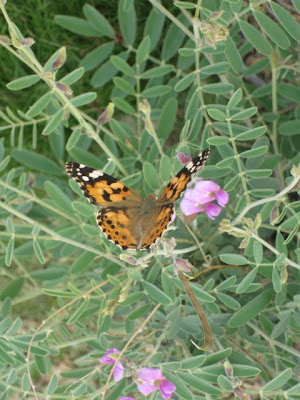 I was surprised to see flowers growing right out of the rocks at Spitzkoppe. 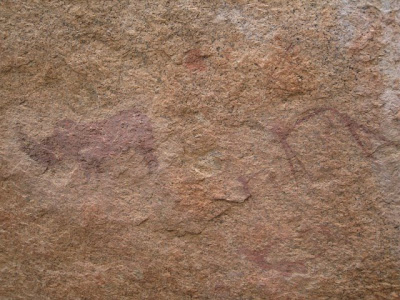 Cave paintings near Spitzkoppe: they're faint, but hopefully you can make out the rhino and two other animals 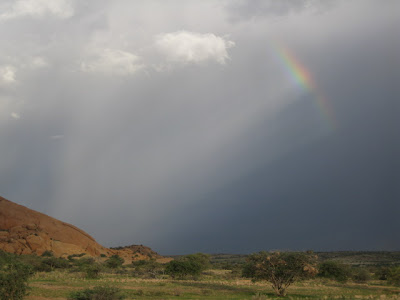 A slice of rainbow brightens the otherwise grey sky 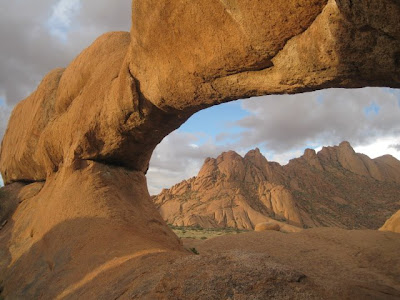 The rock formations at Spitzkoppe were spectacular. Here's a view of one of the distant mountains through a stone arch.

Hey Fran! Please climb some Namibian rocks for me! :)