Sarajevo, the capital of Bosnia and Hercegovina, is a riverside city nestled in a valley below steep green hills. Over its long and colorful history, Sarajevo has been inhabited by Illyrians, Greeks, Romans, Slavs, Byzantines, Ottomans, Venetians and Austro-Hungarians.

Centuries of Ottoman rule brought Islam to Sarajevo, along with many traditional Turkish influences that remain to this day. Under the 19th century Austro-Hungarian rule, the existing Turkish-style buildings were preserved amid the new European-style architecture. The resulting fusion of East and West is both beautiful and fascinating.

While it still bears many scars from the Bosnian War of the early 1990s, Sarajevo is a friendly and vibrant city that inevitably charms visitors. 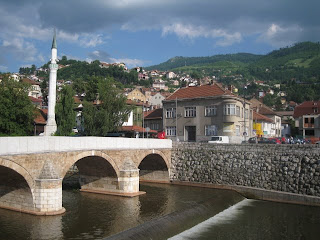 One of Sarajevo's many quaint bridges over the Miljacka River 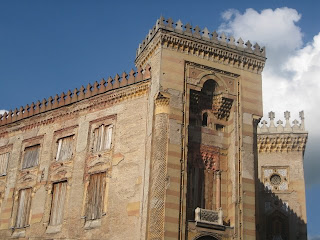 The National Library (previously the Town Hall) was built in the 19th century in the pseudo-Moorish style by the Austro-Hungarians. The building was severely damaged during the war and is still under reconstruction. 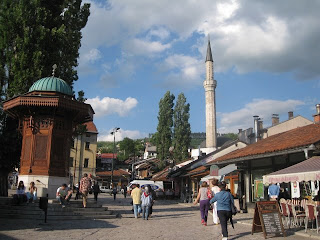 A busy square in the heart of Bascarsija, Sarajevo's Old Town. The Old Town dates back to the 15th century during the period of Ottoman rule, and its narrow cobblestone streets are lined with craft shops and coffee houses.The sebilj (kiosk-shaped public fountain) in this photo was built in the 19th century in pseudo-Moorish style and is a symbol of Sarajevo. 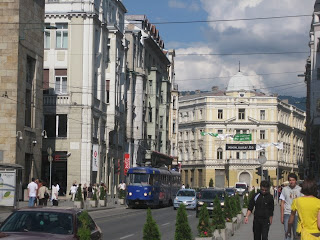 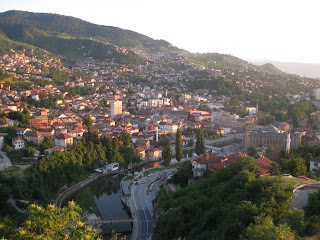 Sarajevo at sunset, as seen from the old city walls above the town
Posted by Frances at 12:02 AM