The jagged peaks of the Teton Range tower over the Jackson Hole valley, providing a dramatic landscape that makes Grand Teton NP one of the most scenic parks of the West. Add to that more than 250 miles of maintained hiking trails, an abundance of lakes and rivers for boating or fishing, and extensive mountaineering territory, and Grand Teton can easily keep visitors happily exhausted for days.

Approximately 10 million years ago, earthquakes along the Teton fault caused today’s mountains to rise and the valley floor to drop; over time, wind, rain, ice and glaciers slowly eroded the range and sculpted the landscape. Then, starting two million years ago, massive glaciers flowing south from Yellowstone further carved the skyline and deposited moraines along the base of the range, forming the lakes that visitors enjoy today.

In 1897, the Tetons first received government protection as the Teton Forest Reserve; Grand Teton NP was first established in 1929, then later expanded in 1950 – after much controversy – to its current boundaries. 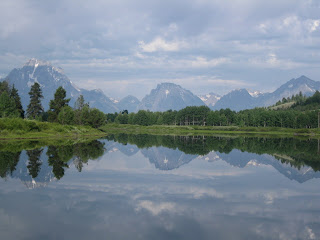 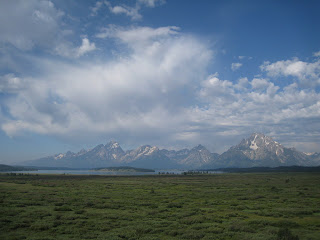 The Tetons tower above Jackson Lake and the valley below, as seen from Willow Flats Overlook 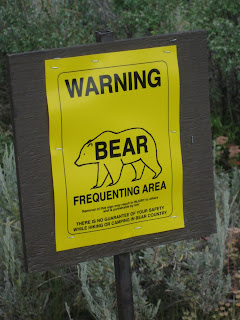 Just one of the MANY bear warning signs I’ve passed 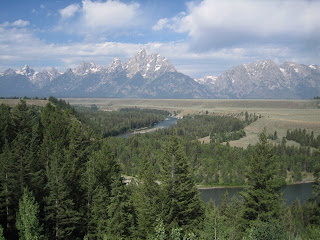 The Snake River flows from its source in Yellowstone National Park, through Grand Teton NP in Wyoming, then on through Idaho and Oregon to Washington; it is home to cutthroat trout, mountain whitefish and river otters 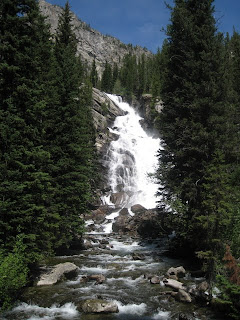 Hidden Falls is a 200-foot cascade on the west side of Jenny Lake, along the Cascade Canyon trail 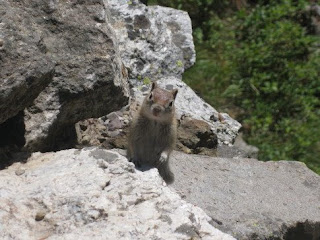 A curious ground squirrel peeks out from behind a rock
Posted by Frances at 12:06 AM