Damascus is one of the oldest continually inhabited cities in the world, and over the centuries, it's been home to Egyptians, Assyrians, Persians, Greeks, Romans, Umayyads, Mongols, Turks and French.

The Old City, surrounded by a Roman wall, is a maze of endless souqs (markets) and twisting alleyways. Vendors sell everything from head scarves and antique coffee pots to soccer jerseys and ripped DVDs. The sweet shops are perhaps the most impressive and abundant of them all - stocked floor to ceiling with candies, nuts or baklava. The Syrian sweet tooth perhaps rivals my own!

The souqs are truly a feast for the senses: all around are the sounds of vendors calling out their wares, fabrics in every color of the rainbow, and the competing smells of chicken shawerma, cardamom-laced Turkish coffee, fresh fruit and countless spices sold by the scoop. Fancy jewelry shops sit beside humble vegetable stalls. In the middle of the cobbled streets, cart vendors sell flat bread or freshly crushed berry juice. On the sidewalks, men smoke sheesha, sip tea and watch the world go by. And in the midst of all that chaos are beautiful ancient mosques, palaces, churches and hamams (Turkish baths). Thankfully, quiet residential lanes veer off from the souqs, providing a peaceful escape from the loud and crowded marketplace. 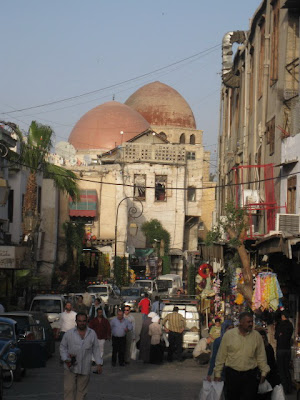 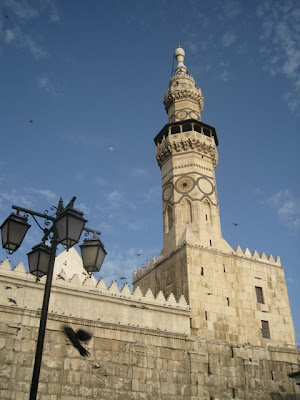 The impressive Umayyad Mosque, built in 705 AD, is a popular pilgrimage site for Muslims. It houses the tomb of Saladin, one of the great Arab heroes. 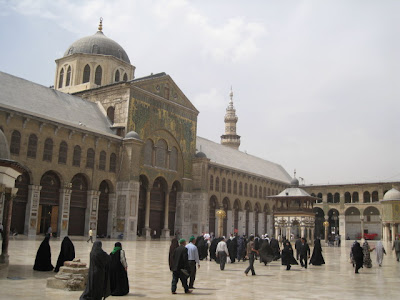 The massive courtyard of the Umayyed Mosque, with its beautiful golden mosaics 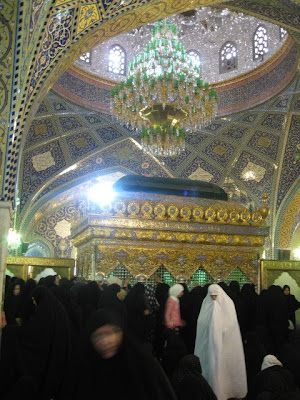 The ornate Shiite Sayyida Ruqayya Mosque, which is dedicated to the daughter of the martyr Hussein. In this photo, women surround the gold shrine to pray, leave tokens or simply touch the shrine. 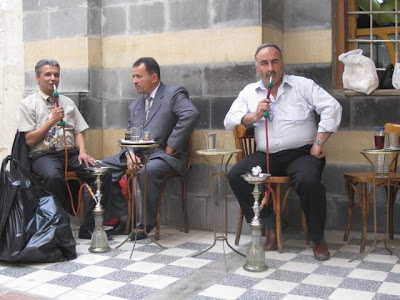 Men smoke sheesha and drink tea in the Old City 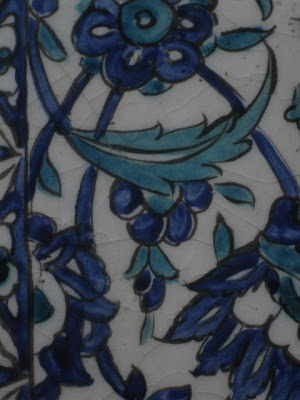 Blue and green painted ceramic tiles adorn many of the mosques
Posted by Frances at 11:55 PM