Petra is an ancient Nabataean city built in the 3rd century BC. The city's ornate palaces, temples, homes and tombs were carved directly into the huge sandstone cliffs of a hidden valley, protected by a narrow gorge entryway.

The Nabataeans were Arabs who controlled the frankincense and myrrh trade routes of southern Jordan in pre-Roman times. Profits from their caravan toll business enabled them to build a powerful kingdom that reached across most of Arabia. They built the city of Petra using a diverse range of architectural styles, including Graeco-Roman, Egyptian and Mesopotamian.

The city came under Roman rule in 106 AD and eventually fell to ruin, although local Bedouins have inhabited many of the caves for years. It was "discovered" by the West when Swiss traveler Johann Ludwig Burckhardt came upon it in 1812. 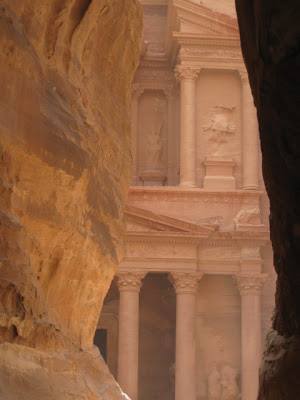 The classic postcard picture of Petra: the view of the Treasury (Al-Khazneh) from within As-Siq. The Siq, a deep and narrow gorge caused by an ancient earthquake, provided a natural defense for the Nabataeans. 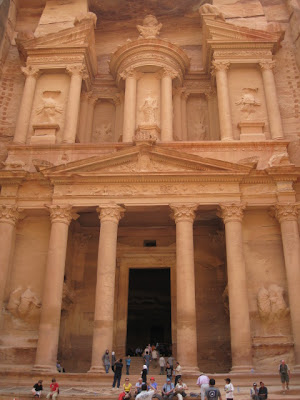 The complete facade of the Treasury 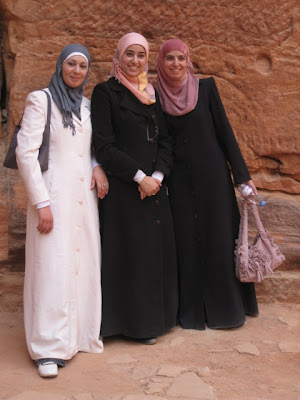 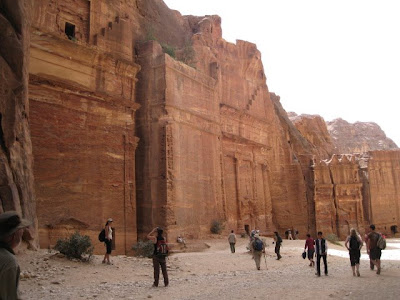 The Street of Facades, rows of Nabataean tombs leading from the Treasury to the Theatre 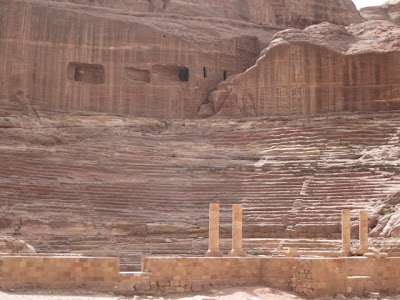 The Theatre, built in Roman style, could once hold 7000 people
Posted by Frances at 10:21 AM