Serengeti National Park in northern Tanzania is one of the world's most famous national parks, and for good reason: it's home to more than a million wildebeest that migrate annually through the park, as well as massive numbers of zebra and other animals. While we were there, we saw (in addition to wildebeest and zebras) lions, buffalo, giraffes, hippos, antelope, and even a leopard.

Serengeti NP encompasses more than 14,000 square km, and it borders Masai Mara National Reserve in Kenya and the Ngorongoro Conservation Area in Tanzania, allowing animals to roam freely between the parks. Maasai tribesmen live within the conservation area only, herding their animals amidst the resident wildlife.

Ngorongoro Crater is a 20km wide caldera (collapsed volcano) within the conservation area, on the edge of the Great Rift Valley. The crater itself houses a huge concentration of wildlife, including lions, elephants, buffalo, wildebeest, zebras, rhinos and even flamingos (in Lake Magadi, the soda lake at the base of the crater). 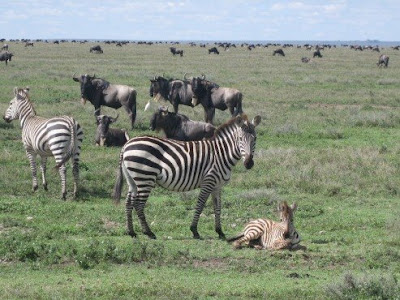 An adult and baby zebra in the foreground, with wildebeest behind 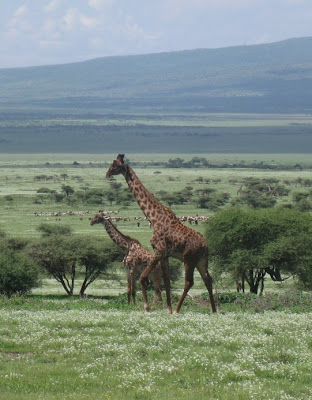 An adult and baby giraffe walk through fields of wildflowers 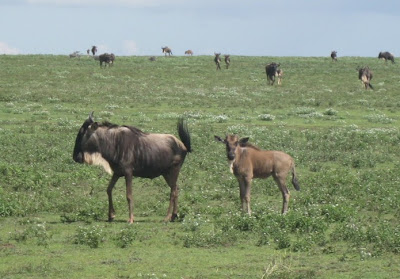 An adult and baby wildebeest in the Ngorongoro Conservation Area 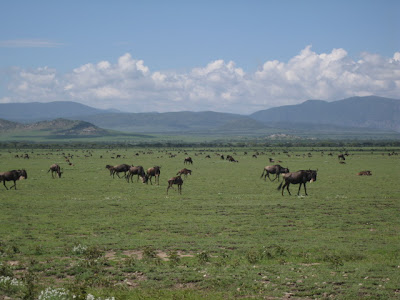 A typical roadside view in the Ngorongoro Conservation Area (often the wildebeest and zebra took over the road as well!) 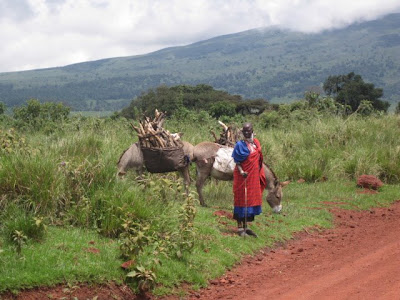 A Maasai woman waits with her donkeys
Posted by Frances at 11:50 AM