Wadi Rum is a beautiful protected desert area in southern Jordan, not far from the borders with Egypt and Israel. The landscape is truly impressive, with massive granite and sandstone formations in various shades of red jutting out of the sand in every direction.

Wadi Rum was first made famous for the Arab Revolt and Lawrence of Arabia in the early 20th century. Today, it's a destination for campers, hikers, rock climbers and history buffs. It's also home to several Bedouin tribes, whose distinctive black goat-hair tents can be seen under the towering cliffs.

We spent one night in a Bedouin camp at Wadi Rum, where we slept under the stars and ate in the traditional Bedouin style (they cook their food in an underground oven/BBQ for several hours, producing wonderfully tender meat and flavorful vegetables). Sunset and sunrise were spectacular, and the surrounding sandstone cliffs drifted from yellow to orange to pink with the changing light. 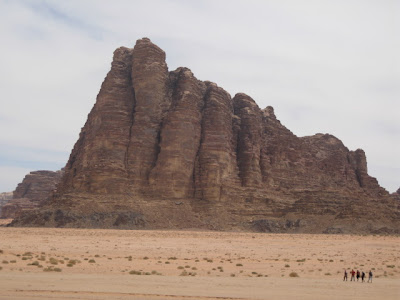 The Seven Pillars of Wisdom, named after the book by T. E. Lawrence 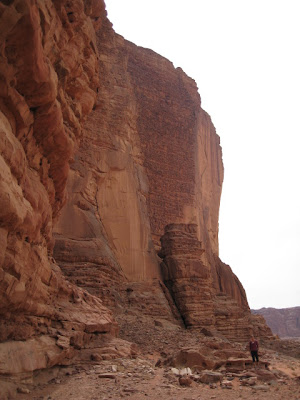 Towering sandstone cliffs. I'm the small figure (black knee-length pants and maroon top) at the bottom right of the photo, to give a sense of perspective. 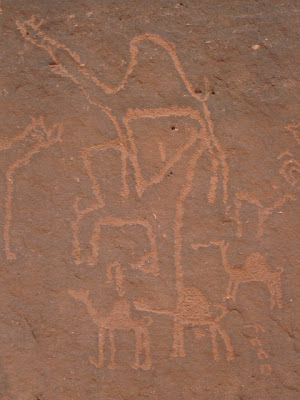 Ancient Thamodian rock drawings, thought to be tens of thousands of years old 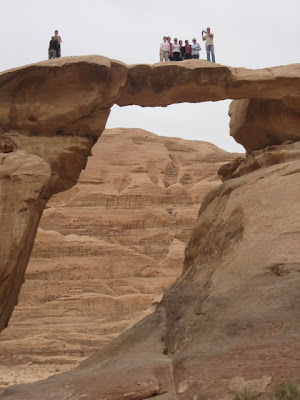 A natural rock bridge. I'm at the top with some of my group and a few random other people. 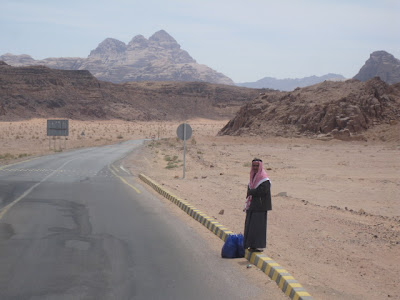