Ha Long Bay, on the Gulf of Tonkin in northern Vietnam, is a UNESCO World Heritage Site and one of the country's most popular destinations. Thousands of steep, lushly forested limestone islands dot the bay, providing secluded beaches and hidden grottoes galore, although most of the islands are uninhabited.

Legend has it that the islands were formed long ago by a family of dragons, who were sent by the gods to help the Vietnamese defend their land against invaders; "ha long" means "descending dragon." The bay certainly has a mystical air about it, especially in the foggy morning light, when the islands seem to stretch as far as the eye can see. 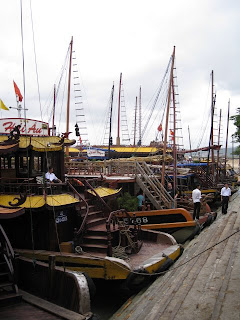 Junks line the marina in Ha Long City, waiting to take passengers on the bay 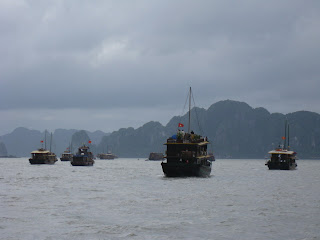 Junks are the most popular way to visit Ha Long Bay, and at certain times of day, they seem to outnumber the islands! 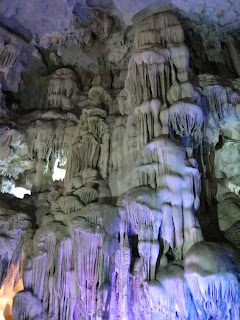 Thien Cung is a massive cave in the bay, with its impressive stalactites and stalagmites illuminated by strange (but admittedly dramatic) colored lights 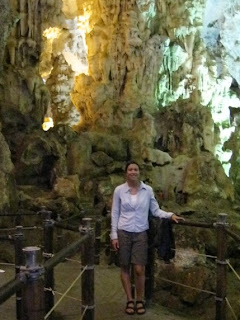 Here I am in Thien Cung cave, happy to be exploring 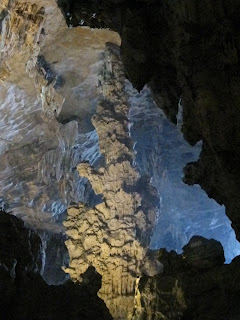 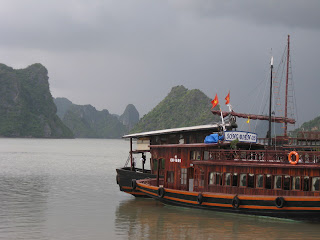 Here's our junk, docked at Cat Ba Island
Posted by Frances at 12:01 AM