The My Son ruins, nestled in the jungly mountains outside of Hoi An, comprise the most extensive Cham ruins in Vietnam and are justly listed as a UNESCO World Heritage Site. My Son was built as a religious and intellectual center during the 4th century, under the rule of Champa king Bhadravarman. The site was continuously occupied until the 13th century, and it is considered a smaller version of Southeast Asia's other Indian-influenced ancient cities, such as Angkor Wat in Cambodia or Ayuthaya in Thailand. Unfortunately, centuries of Chinese, Khmer and Vietnamese fighting, followed by extensive American bombing, destroyed much of the site; today, only about 20 of the original 70 structures remain. 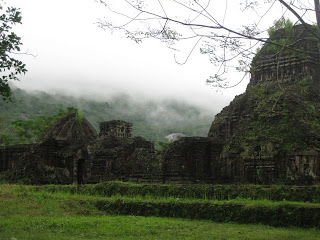 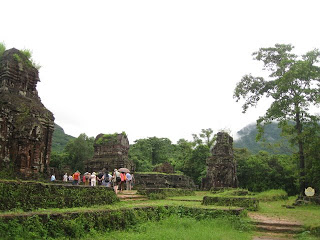 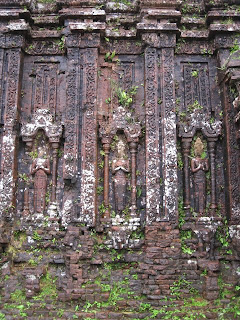 Intricate carvings decorate the walls of the buildings throughout the complex. Oddly enough, it is the restored sections of buildings that have the most moss; the original Cham bricks (whose composition and method of mortaring are still a mystery) are surprisingly dry, intact and clean. 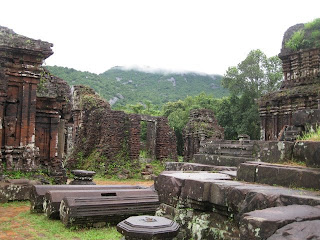 Altars and columns cover the ground in front of the ruins; notice that these fragments have practically no moss growing on them 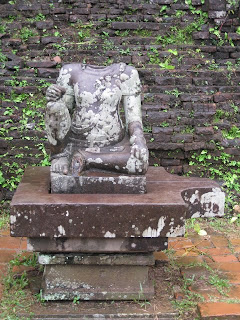 The god Shiva stands in a traditional square-cut Cham altar (called a yoni), meant to represent the female form 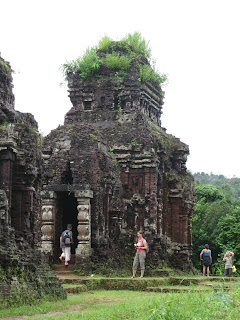 One of the more intact structures, with a massive yoni inside 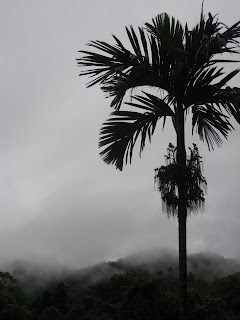 A palm tree on the path to My Son, with mist-covered mountains in the background
Posted by Frances at 12:07 AM