Compared to the bustling, sometimes frenetic, capitals of its neighboring countries, Laos' quiet capital of Vientiane can come as a welcome surprise. With a population of several hundred thousand people, it is the country's largest city, but it feels much more like a town than a major metropolis. The city center is easily (and quickly) covered on foot, there are no high-rise buildings to speak of, and the wide roads are often free of cars.

Despite its size, the diminutive capital has plenty to charm visitors: peaceful temples, beautiful river views and cozy restaurants. Watching the sunset over the Mekong River at one of Vientiane's many waterfront bars or cafes is a popular evening pursuit and a fitting introduction to a country that proudly proclaims its relaxed pace and laid-back attitude. 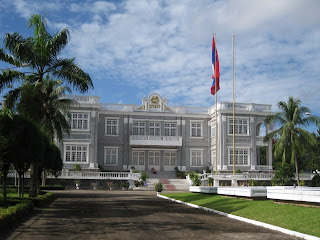 The Presidential Palace stands at the end of a wide, tree-lined street, with its back facing the Mekong River 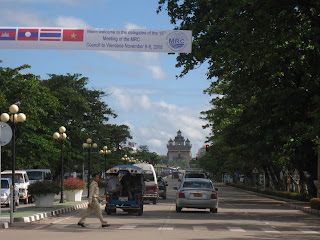 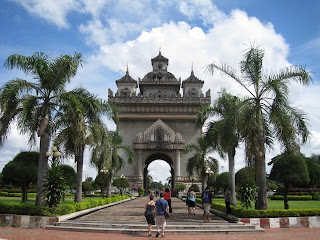 Patuxai, Vientiane's version of the Arc de Triomphe, was built in 1969 to honor those who died in the pre-revolutionary wars 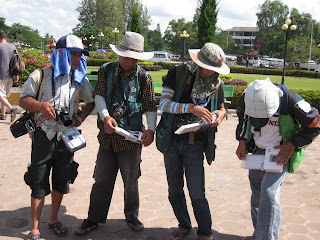 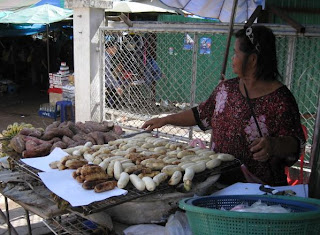 A woman grills yams and bananas near the morning market 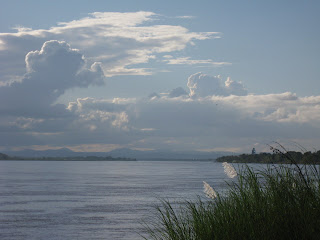 The wide Mekong River marks the boundary between Laos and Thailand
Posted by Frances at 12:04 AM