Bergen was founded by King Olav Kyrre in the 11th century, and it was Norway's largest city from the 13th century to the 19th century. Because of the city's strategic location on the southwestern coast, Bergen thrived during the Middle Ages as part of the Hanseatic League, a network of Baltic and European cities with a shared trading agreement.

Today, Bergen is the country's second largest city, but its commercial focus has shifted to oil and tourism. It's a popular cruise ship destination because of its colorful harbor area and its proximity to Norway's western fjords.

Bergen is a wonderful place to wander, with its charming coastal architecture, historical waterfront district and lively fish market. The hills above downtown are crisscrossed with narrow cobbled streets that look out over the busy harbor below. 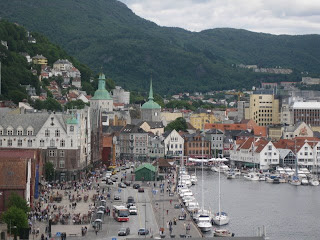 The view of the harbor from Rosenkrantz Tower within Bergenhus, the city's 13th century fortress complex. The tower was built in the 16th century atop the foundations of a 13th century keep. 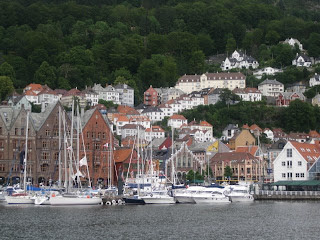 The view across the harbor from Nordnes to Bryggen 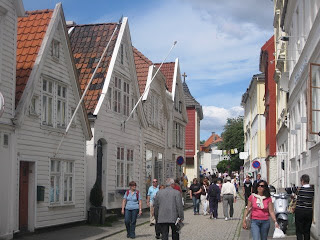 Bergen's bustling fish market has everything from king crab legs and smoked salmon to monkfish and caviar
Posted by Frances at 10:29 AM