Stockholm, the capital of Sweden, is a beautiful city built on 14 different islands connected by bridges, tunnels and boats. It's a city that makes the most of its spectacular setting, and the waterways between islands bustle with vessels of every shape and size, from cruise ships, ferries and sailboats, to canoes, kayaks and jet skis.

Stockholm was originally founded in the 13th century, and its location on Lake Malaren at the edge of the Baltic Sea made it an important maritime trading center. It became the capital of Sweden in the 17th century, and today it's a design, fashion and technology hub with nearly 2 million inhabitants. 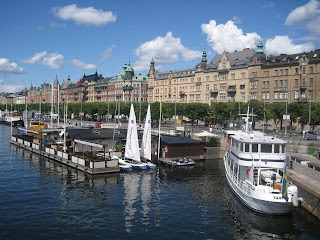 Beautiful old buildings line one side of Strandvagen, while boats line the other 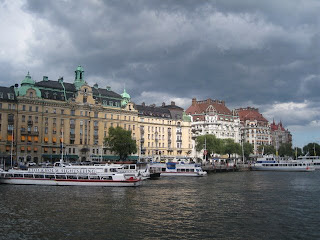 More ornate waterfront buildings, with ferries in front; a canal tour is an ideal way to explore the city's waterways and appreciate its architecture 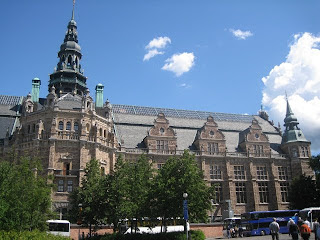 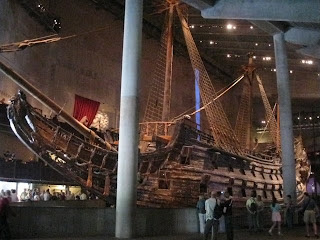 The Vasa Museum holds the reconstructed remains of the warship Vasa, built for Swedish King Gustavus Adolphus. The ship sunk only 20 minutes into its maiden voyage in August 1628. The ship was salvaged from Stockholm harbour in 1961 after 333 years under the sea. 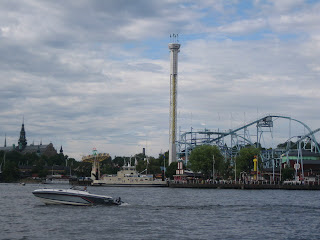 Djurgarden, one of Stockholm's 14 islands, was once a royal hunting ground. Today it is a massive park with walking trails, several museums and this waterfront amusement park. 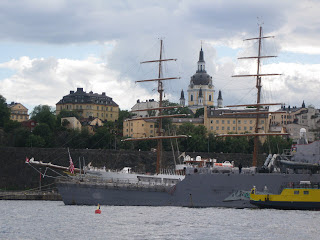 An American ship in Stockholm harbour
Posted by Frances at 12:02 AM